Commenting on the report, H.E. Omar Sultan Al Olama, UAE Minister of State for Artificial Intelligence, Digital Economy, and Remote Work Applications, and Chairman of Dubai Chamber of Digital Economy, said, “This in-depth report is a valuable resource that will support us in our mission. It offers a wealth of practical information about Dubai’s fast-growing digital economy and competitive advantages on offer. I encourage you to further explore the exciting growth opportunities emerging in this dynamic market.”

Though much of the groundwork is still being laid out in terms of what is to be done in the coming decade for Dubai to become a leading global digital economy hub, there are quite a few elements, targets, and strategic priorities that Dubai has already made very clear. Here are ten interesting things to know about Dubai’s digital economy ambitions:

1. The UAE intends to double its digital economy contribution to the national GDP from 9.7% (2022) to over 20% by 2031 There exists both a federal-level and a Dubai emirate-level digital economy strategy, and oversight committees at both levels as well. The strategy clearly indicates the country’s ambitions for Dubai to become the leading digital economy hub in the world. Dubai’s shorter-term ambitions include attracting 300+ new digital businesses to Dubai by the end of 2024, being home to over 20 unicorns by 2030, and having a digital economy worth well over US$100 billion annually by 2031. (This is substantial, considering the UAE’s national GDP hovers around $500 billion today).

2. Dubai aims to support 40,000 virtual jobs by 2030 To support its ambitions, Dubai has created remote work visas, which are work permits that allow individuals to work virtually from Dubai. Dubai was ranked second among 75 cities in 2021 for remote work, and it has the second fastest growing remote work hub for digital nomads. 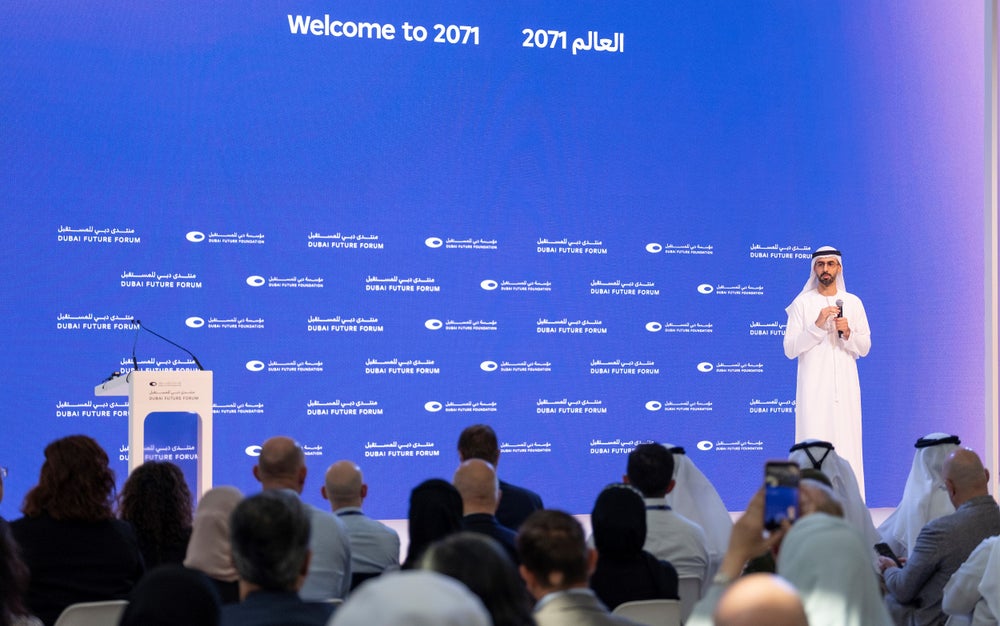 3. The UAE has set a target for itself to achieve the highest number of coders per capita in the world Attracting, developing, and retaining top tech talent is fundamental to the success of the country and Dubai’s digital economy ambitions. Various programs to train local and international coders have been launched, including the National Program for Coders, CodersHQ, One Million Arab Coders, and various graduate and post-graduate level artificial intelligence (AI) programs at local universities, to name but a few. To attract top talent from around the world, the UAE has set aside 100,000 golden visas specifically for coders and advanced technology experts to relocate to the Emirates. Golden visas are coveted 10-year visas that allows holders access to the UAE. There is also the UAE Green Visa program, which provides a five-year residency for skilled employees, without a sponsor or employer in the country; this visa is ideal for freelancers, investors, and digital nomads, so long as they can account for a minimum AED15,000 salary.

4. The UAE was the first country in the world to appoint a Minister of AI in 2016 This Ministry has since expanded to include Digital Economy and Remote Work Applications within its remit. The UAE sees AI as integral to its Centennial 2071 ambitions, and it has forecasted that a strong adoption of AI would help boost the UAE’s GDP by up to 35%, and reduce government costs by 50%. As for Dubai, the city views AI as its biggest future asset towards becoming the happiest city on Earth. The belief held is that as touchpoints and services across the city become increasingly frictionless and seamless, citizen and customer happiness is inevitable. Today, 90% of Dubai’s government services are digitized and available online. Smart Dubai partnered with IBM to develop a government-wide AI Roadmap in 2017, and subsequently launched the AI Lab as well. The AI Lab has been working across government entities to transform these digital government services into AI-enabled services. One such example is the AI-enabled Saad, a government service allowing individuals to ask it various questions around business licensing procedures in the Emirate.

5. Dubai has already been crowned the blockchain capital of the world Dubai was crowned blockchain capital of the world after launching and executing its Dubai Blockchain Strategy in 2016, and becoming the first city to be fully powered by blockchain. The Dubai government has integrated many processes onto the blockchain, in an effort to save billions of dollars in annual operating costs just by streamlining document processing times. So far, activities such as making digital payments for government services, verifying real estate title deeds, licensing healthcare professionals through the Dubai Health Authority, and automating Dubai Customs’ supply chain procedures have all been implemented onto Dubai’s own blockchain technology.

Related: To Future-Proof Healthcare, Collaboration Between The Public And Private Sectors Is Key 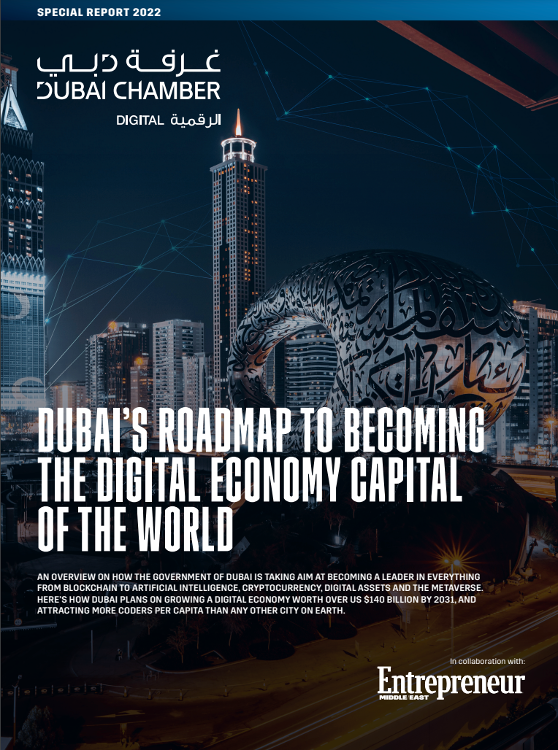 Dubai’s Roadmap to Becoming the Digital Economy Capital of the World, which can be downloaded by clicking here.

6. Dubai aims to become a world hub for cryptocurrency and digital assets In 2022, the UAE launched the Virtual Assets Regulatory Authority (VARA) which rolled out new legislation aimed at making Dubai the global center for crypto assets and related industries such as the metaverse. The Dubai Chamber of Digital Economy has launched a Digital Assets Business Group to convene major stakeholders in the industry that will help guide and support the development of the industry and help to develop legislative and regulatory proposals. Major global crypto players such as Binance, Crypto.com, and Bybit have all already moved their leadership to Dubai, favoring the country’s “light touch” approach to regulation. Over 11% of UAE residents also own cryptocurrencies, placing the country in the top 10 countries worldwide for cryptocurrency adoption. This may also be the reason why many UAE companies have begun accepting cryptocurrency as a form of payment for everything from groceries to real estate.

7. Dubai launched the Dubai Metaverse Strategy in 2022 with the ambition of Dubai becoming one of the top 10 metaverse economies and hubs in the world The strategy aims at attracting more than 1,000 blockchain and metaverse companies to Dubai to develop Web3 technology and its applications for Dubai. The strategy focuses on the development of extended reality, augmented reality, virtual reality, and mixed reality applications, and to lay the groundwork for some of the most secure metaverse infrastructure and regulations in the world, which will, in turn, help to accelerate the adoption of these technologies.

8. Dubai is moving onto the next phase of maturity, which is to move beyond digitizing all Dubai government services, to digitizing all aspects of life in Dubai The Dubai Digital Authority, more commonly referred to as Digital Dubai, was established in 2021 precisely for that reason. It brings together the expertise of four government entities: Dubai Electronic Security Centre, Dubai Statistics Center, Dubai Data Establishment, and Smart Dubai with the key task of digitizing life in Dubai while accelerating cybersecurity efforts.

9. Dubai is taking future-proofing the city and the country seriously Dubai Future Foundation, Museum of the Future, Dubai Future Labs, and initiatives like 10X are all working towards researching, designing, and implementing strategies and projects to make Dubai the best city in the future, planning 10+ years ahead. The Dubai Future Foundation is tasked with creating a cohesive innovation ecosystem dedicated to designing the future; this ecosystem includes think tanks, accelerator programs, incubators, labs, regulatory sandboxes, and knowledge platforms.

10. Innovation and advanced technologies is the name of the game in Dubai, which has already announced plans for autonomous vehicles, 3D printing construction, hyperloops, and electric skypod networks Dubai’s 3D Printing Strategy will require 25% of all new construction of buildings to use 3D printing technology. Meanwhile, Dubai’s Autonomous Transportation Strategy aims to transform 25% of all trips in Dubai to become driverless; as part of that initiative, Dubai plans to build a skypod network that will allow aerial passenger traffic traveling at speeds of 50km/hr. Meanwhile, expect the Virgin Hyperloop to help send cargo between Abu Dhabi and Dubai in just 12 minutes; after the hyperloop irons out its kinks on cargo, passenger pod hyperloops may soon follow suit.

Read more about this topic in our special report, Dubai’s Roadmap to Becoming the Digital Economy Capital of the World, which can be downloaded by clicking here.

Related: Dubai Chamber Of Digital Economy Plans To Attract 300 Digital Startups Within The Next Two Years