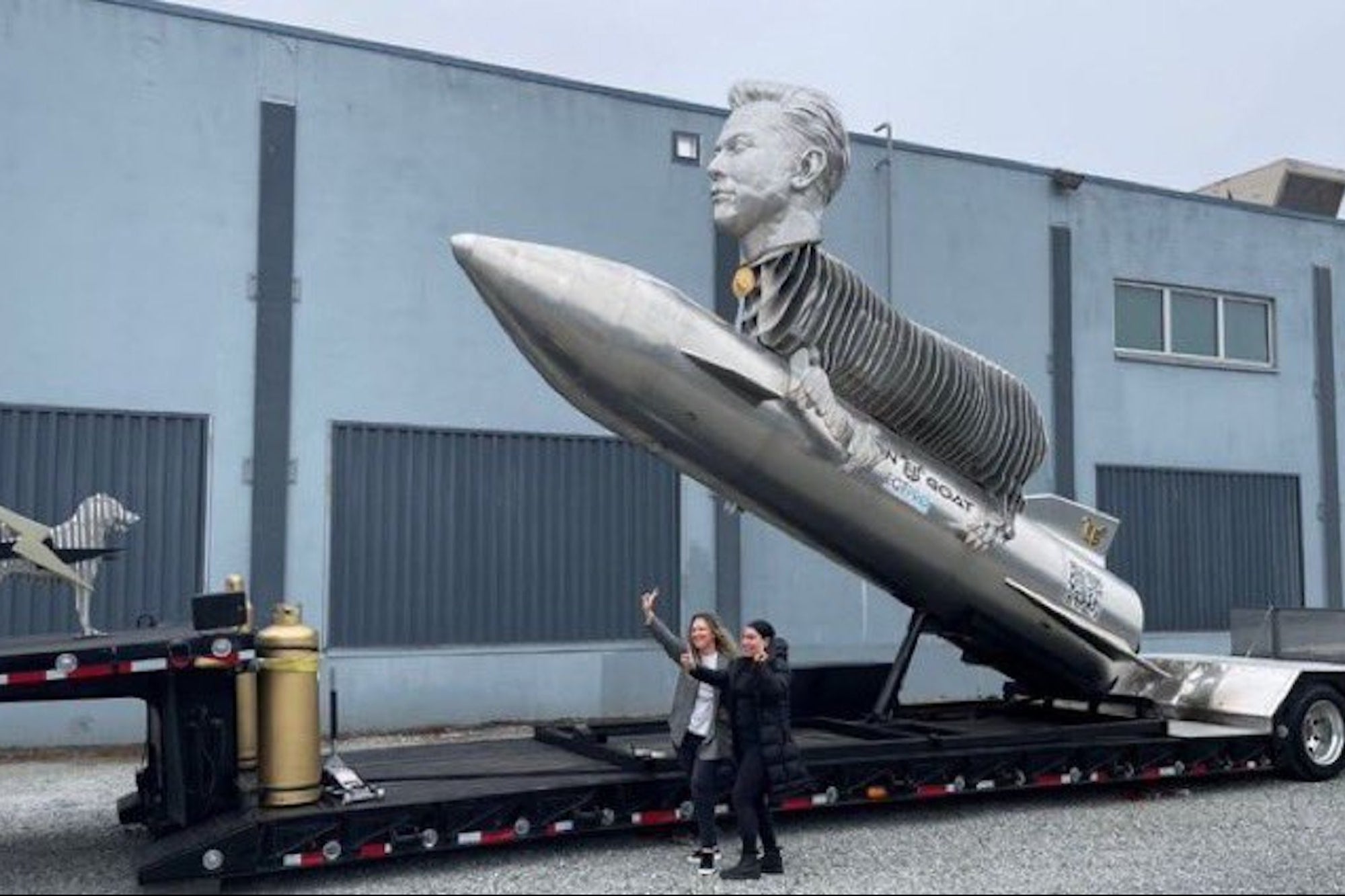 Elon Musk’s fans will often refer to him at the GOAT (greatest of all time) but one group took the joke a little too far after building a $600,000 statue in his honor — and the billionaire has yet to acknowledge it.

The statue, which has since gone viral, was estimated to be 12,000 pounds and features Musk’s head with a goat’s body on a rocket ship, potentially a nod to the billionaire’s SpaceX endeavors or perhaps as a metaphor for Musk’s Tweeting about taking crypto coin Dogecoin “to the moon.” Musk is even wearing a necklace with the Dogecoin symbol on the statue.

Representatives of the Elon Goat Token brought a goat statue with the head of Elon Musk to the Tesla headquarters – they spent $600,000 on this.

The billionaire has not yet responded pic.twitter.com/5zue5ix3c3

Thousands of Musk devotees and fans crowded around the giant object with hopes of seeing Musk himself come out to accept the statue, which was delivered to Tesla HQ in Austin, Texas over the weekend. But the piece seems to be more than just a piece of fan mail.

The statue appears to be a promotion for the crypto coin EGT, or Elon GOAT token, which launched at the beginning of this year. The official Twitter account for the coin confirms that they were the senders of the statue as their bio quite literally reads “built a Massive Monument for Elon because he’s Badass and we’re heading to Austin to give it to him Nov 26th.”

The company Tweeted out a video of the delivery in process, hoping that Musk would “claim” the coin and add to the legitimacy of the EGT team’s work.

We’re very proud of our accomplishments and commitment to #EGT

We’ve always had long term vision for $EGT and will continue to build the brand and utility.

We feel our hard work can lead to Elon claiming #ElonGOAT and we will work towards this goal! Maybe have some fun too! pic.twitter.com/Rk2Gdn5PpE

“We’ve always had long term vision for $EGT and will continue to build the brand and utility,” the Tweet read. “We feel our hard work can lead to Elon claiming #ElonGOAT and we will work towards this goal! Maybe have some fun too!”

“I’m a huge fan of Elon and I want to give this man his flowers while he’s alive,” Aamir Manzoor, an Elon GOAT owner told Wall Street Journal as he stood outside the Austin offices. “He’s done a lot for the world.”

As of Monday afternoon, Musk had not acknowledged the statue nor the coin.

Whether or not Musk claims the coin or acknowledges the creators behind it, the statue has generated plenty of buzz, making it an approximately 100% chance that the very online new Twitter owner has already seen it circulating on the platform.