Imitation may be considered the most sincere form of flattery, but when it comes to messing with Vogue, it’s definitely not in style.

Rappers Drake and 21 Savage are in hot water with the iconic publication after they were hit with a copyright infringement lawsuit on behalf of Vogue’s parent company, Condé Nast, for using the magazine’s logo and likeness in promotional material for their new joint album, Her Loss.

In a complaint obtained by CBS News, Condé Nast alleges that the promos were “built entirely” on Vogue likeliness, most notably using a fake Vogue cover with Vogue’s exact logo and formatting, which have since been removed from social media. 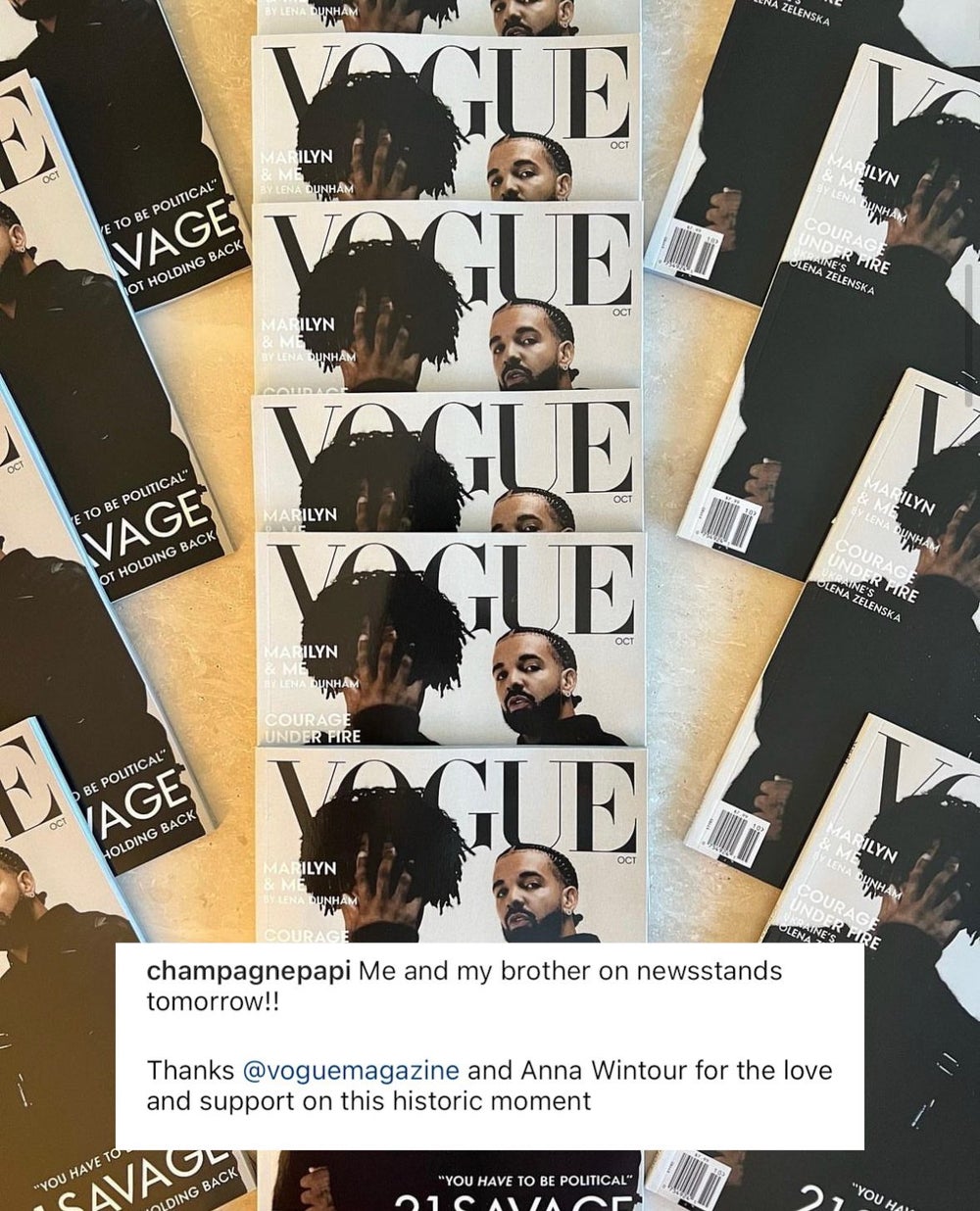 A screenshot of the now-deleted social media post by Drake.

“Defendants’ flippant disregard for Condé Nast’s rights have left it with no choice but to commence this action and seek the immediate injunctive relief requested herein, together with any and all available monetary remedies to deter the type of flagrant infringements and false advertising in which Defendants have engaged,” the documents reportedly read.

The rappers are being sued for upwards of $4 million.

Drake also thanked Vogue‘s editor-in-chief, Anna Wintour, in his caption debuting the fake cover but the outlet and Wintour have maintained that they had no knowledge of the campaign, nor did they endorse it.

“All of this is false. And none of it has been authorized by Condé Nast,” Condé said, per E! News. “Vogue magazine and its Editor-in-Chief Anna Wintour have had no involvement in Her Loss or its promotion, and have not endorsed it in any way.”

The suit also claims that the two rappers went so far as to hand out fake physical copies of “Vogue” magazines with their faces on the cover in major U.S. cities including New York and Los Angeles.

they saying mark is handing out boxes of drake & 21 vogue magazine under the CN tower!!!!! spread the word!!!!!

Someone was handing out that Drake/21 magazine and people paying resell. I got like 4, people kept leaving them at the restaurant

Got my Drake/21 Vogue magazine… nobody talk to me

Condé is requesting that the two rappers cease the use of the promotional materials immediately.

Neither Drake nor 21 Savage has publicly responded to the lawsuit.

Her Loss was released on November 4.