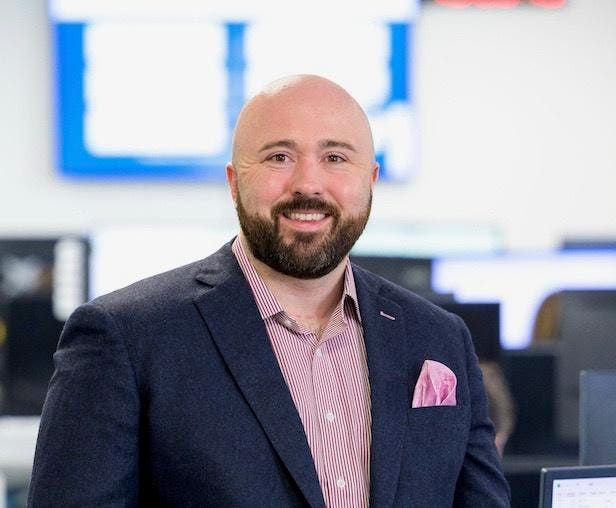 Technology recruitment has always been a lucrative business, with the demand for tech professionals showing no sign of slowing down. Before starting his own recruitment business, Tom White earned huge sales commissions, hitting a record of £500,000 in a single year.

Now he has a different outlook on the sector, and as the founder of a recruitment firm specializing in IoT and video placements, his goal is to make working in tech a force for good. White’s first firm, Paratus People, was launched in 2016 and relaunched this year as 5Values. With a newfound sense of purpose, its mission is to get behind the brands that support, find, and showcase the tech talent making technology a force for good in the world.

As a youngster, White’s interest in technology led him to study Computing for Real-Time Systems at university. Still, when his interest in a full-time career in pure tech waned, he switched to a course in business and property. On graduating, he embarked on a successful sales career, selling mobile phones to corporates, and was quickly head-hunted by a rec2rec firm for a role seeking out exceptional technology talent.

In 2009 he joined another recruitment firm on a commission-only basis as the global financial crisis had made hiring with standard salary packages scarce. Undeterred, White went on to achieve his best-ever year, earning £500,000 in commissions, a sales record for the business. He also generated over £5 million in fees for the business, and by the time it was sold to the Manpower Group in 2015, he had secured an equity partnership. Having exited the business with capital, it was time to go it alone, focusing on the two in-demand tech areas of video and IoT.

He says: “By the end of 2015, the transition from linear to non-linear content streaming, or video anywhere, was a key feature of the tech landscape. Amazon acquired Lovefilm, Netflix gained prominence, and the shift from set-top box to OTT (Over the top Video) created a demand for a new generation of tech talent to help companies herald in this digital shift.”

In 2016, he launched Paratus People, which achieved a turnover of £2 million by the end of its first trading year. But White wanted something more than a successful tech recruitment business. The transition to the current brand 5Values began with his desire to create a company charter based on the principle of being a force for good in the world of digital transformation, reflected in its new name and ethos.

He says: “Our five core values underpin everything we do. Isaac Newton once said, ‘If I have seen further, it is by standing on the shoulder of giants’ We liked this a lot. The five values reflect Isaac’s name: Inclusive, Sustainable, Attentive, Authentic and Considerate.”

Video and IoT remain the focus of the company’s core services. While there has been some video consolidation, streaming media’s instant gratification is rising, particularly for the younger generation. IoT concepts like Digital Twin will evolve and provide more measurable activity on the digitalization of real-life events and the analytics and more important predictive outcomes that can be achieved to save lives, not just money.

White says: “Over the past two years, we’ve placed an increasing number of engineers who are enhancing the development of the electric vehicle infrastructure through a major national EV charging point supplier and one of the largest U.S. suppliers of EV components. We’ve built teams for tech companies incorporating advanced machine learning, data and robotics to enhance the waste management and recycling industry. This area of assignments has grown 35% in the past year for our business.”

5Values is also involved in several software development projects to make audio content more accessible and inclusive for all. This comes following the US Food and Drug Administration’s deregulation of prescription ‘over the counter’ hearing aids.

“The company was able to provide crucial candidates for companies to develop a broader range of this burgeoning tech,” says White. “Not all of our clients’ ‘north star’ aspirations are creating tech as a force for good, yet, but we hope to educate and inspire them along the journey through our work.”

Through its IoT podcast, 5Values showcases companies that have built devices to detect wildfires, such as Dryad, NTT Data, which is using digital twins to save the planet, and Deloitte, which is using IoT to improve food production sustainability and Pangea who are improving remote healthcare through 5G technology.

White has also launched initiatives reflecting the company ethos for its 35 employees, including the 100-hours initiative. Staff are given 100 hours, paid outside of their holiday allowance, so that they can give something back to the community, for example, by supporting job seekers with career advice, health and wellbeing and learning and development. 5Values is working towards B Corp status.

The business is on track to turn over £10 million this year. With offices established in the U.K., Netherlands, and Germany, expansion to the U.S. is scheduled for 2023.

Ultimately, what matters for White is his company’s purpose. He says: “The pandemic changed us; it changed me and made me reflect on who I am, the business I want to grow, and the direction I should be taking. Over time, you realize if you aren’t helping fix the problems, you are part of the problem. We realize profit is for good, but it’s nothing unless it has impact.”