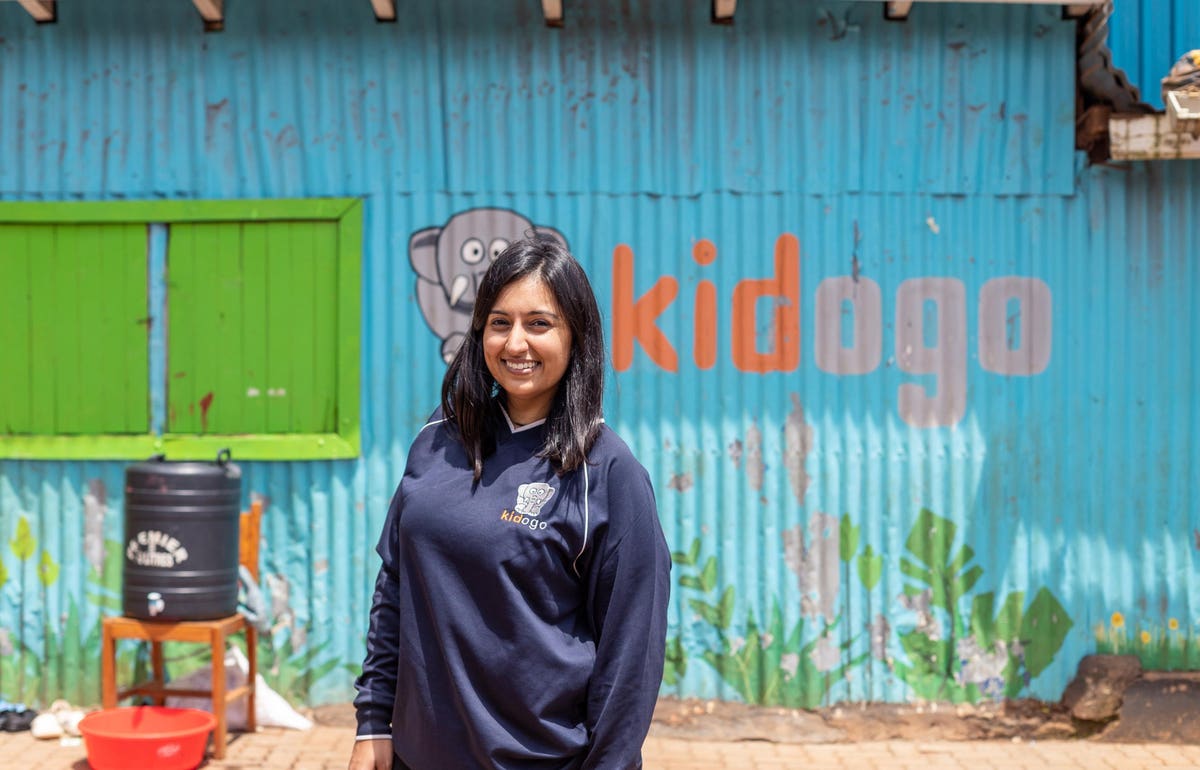 In 2011, while working for a non-profit in Kenya, Sabina Habib visited a daycare center in an informal settlement, or slum, of Nairobi. The experience was startling.

When she entered the 10 foot by 10 foot corrugated metal shack, where there was almost no light and the smell was awful, Habib stumbled across something—only to realize that she’d almost tripped over a little girl. Then she saw more than 15 babies who were eerily silent, clearly so neglected they’d given up any hope of receiving help. After that, she learned how widespread such facilities, known locally as baby care, were—about 3,000 in just Nairobi slums. “The problem was so big, yet no one was doing anything about it,” she says.

What she saw also shocked her into taking action. After several years of research, Habib, who calls herself “an entrepreneur by accident,” and her then-boyfriend, now husband, Afzal, launched Kidogo. The network of childcare facilities aims to achieve a triple play: giving children a good start in life, mothers peace of mind and franchisee/childcare operators access to economic opportunities they wouldn’t have otherwise had.

Today, there are 763 centers in 33 communities in Nairobi serving a total of 16,206 children five days a week.

Kidogo’s mission rests on a key fact of child development. The first five years, and especially the initial 36 months, of a child’s life are of critical importance to cognitive development. For that reason, being in a safe, nurturing and stimulating environment is crucial.

At the same time, mothers who are gainfully employed need to be able to do their jobs without worrying about their children. Yet 40% of children below school age globally—350 million in all—need childcare and don’t have access to it, according to the World Bank.

In Nairobi’s informal settlements, mothers face three unsatisfactory childcare options. With little family support available, they can leave their child at home alone. Or they can have an older sibling—typically a girl—look after her younger sibling, thereby hurting her chances of getting an education. Or they can leave the baby in a daycare center. These establishments are housed in the tiny shacks in which residents live, with one woman looking after on average 22 infants and toddlers, according to Habib. There’s little hands-on care or nutrition provided, much less light or effective ventilation.

When Habib came home after her visit to the daycare center, she called Afzal in Toronto and talked about what she’d seen. By the end of the conversation, they had decided to do something about the problem. “We asked ourselves how might we provide a higher quality childcare option at roughly the same price point mothers were already paying,” she says. When Habib came home for visits, she and Afzal would discuss their plans during dates, sometimes turning over napkins at dinner to map out business plans.

The situation was particularly poignant for Habib. The daughter of immigrants from East Africa who had moved to Toronto before she was born, she felt a deep identification with the children she saw. “If I had been born in the country my parents came from, my trajectory in life would have been completely different,” she says. “Where a child is born shouldn’t dictate where they end up in life.”

Well aware that they didn’t come from the communities experiencing the problem, the co-founders spent two years speaking to hundreds of childcare operators and mothers. They also conducted a global benchmarking study to see whether similar issues existed in slums elsewhere. What they learned, says Habib, was that “No one had cracked the code” when it came to delivering acceptable childcare, defined, she says, by, “whether we’d send our kids to this center.” Also important was whether the operation was sustainable and the model was scalable.

The solution they devised was a franchising model. First, Kidogo invites all the daycare operators in the community to a workshop to learn about the approach. After that, women who’ve expressed interest go through an accelerator program that includes, among other lessons, the basics of marketing and billion. At first the program was 18 months, but eventually it was shortened to three. Then, Kidogo invites qualified participants to become franchisees. It also will make renovations, like creating a skylight and more windows for better lighting and ventilation.

But when the two co-founders approached multiple NGOs with their research and plan, none were interested. So they decided they’d have to do it on their own. “We gave ourselves one year to give it a shot,” says Habib. They saved $15,000 and launched their first center, which they used to demonstrate to childcare operators in the informal settlement what they had in mind. “We had to show them what was possible,” she says.

Now, Kidogo has about a 30% market share in each location it serves—a percentage Habib says they don’t want to increase. “Scaling for us is not just scaling our organization, but scaling our impact,” she says. Her thinking: By not expanding too much in any one community, residents in that locality will pressure other daycare providers in the area to up their game in order to compete. Their research has shown that, after one year of exposure to Kidogo, parents change how they choose which center to select. While before it was all about proximity and hours of the operation, they now focus on the level of nutrition, safety and sanitation, as well as how engaged center operators are with the children. “For us, that’s systems change,” she says.

A nonprofit in the U.S.—running as a for-profit would have required that Kidogo serve a somewhat more affluent customer, which would have diluted the mission, says Habib—the enterprise is registered as an LLC in Kenya. That’s because ventures charging fees can’t register as nonprofits in that country.

There are three types of Kidogo centers. Some operate out of a franchisee’s home. (That typically is the 10 by 10 foot shack found in Nairobi’s urban settlements). Because those locations also house the woman’s belongings, they can fit about eight children. Others are only used for daycare, so they serve about 15 kids. The third operates out of a school that can potentially take children up to the sixth grade, with a separate room for daycare. They have 40 to 50 children.

That also creates a career pathway for franchisees, who may start out with a home-based center and gradually expand to a rented space and, finally, add classes, until they’re running a school. As their venture grows, franchisees also usually hire other women to help out.

Franchisees have biweekly check-ins with Kidogo. And they get access to an app, which helps with administrative tasks. Children also are served hard-boiled eggs twice a week to stave off malnutrition. Plus there’s a monthly get-together where all the franchisees discuss their challenges, from the long hours to the loneliness of the work and a general lack of respect for their livelihood. Habib describes it as “the stickiest” part of her model. Franchisees, who pay a fee of $5 to $15 a month. can increase revenues by up to two-and-a-half times after one year, according to Habib.